Why should you read my Scoliosis story? 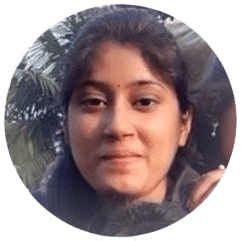 I guess that I should start this article by telling you who I am, what my life is like and what I like to do. My name is Sushmita and currently I am 23 years old. I have completed my graduation.  I am a very positive person and like being around other people. Right now I am teaching children in my village.

I live in a village in West Bengal famous for Shiva Pilgrimage. Every year millions of Shiva devotees travel from far and wide to our village during the months of July/August.

Now that I have painted you a picture of my life I want to tell you about the toughest thing that I have ever gone through—a spinal surgery for my bent back when I was 14 years old.

Background on my Scoliosis

Sometimes in life you are hit hard and it slows you down for a little while or maybe even a long while. I found out that I had scoliosis (curvature of spine) when I was twelve. I was in sixth grade and was having a great year until I found out that my curve had increased. The doctors expected me to wear a brace for  twenty-four hours a day, three hundred sixty five days a year but there was no way that I could do this in the village in the hot summer.

After wearing the brace for a year, I went to see Dr Ujjwal K Debnath. I had my X-rays and it showed my lumbar curvature had progressed in the last one year.  It was fifty (50) degrees. My doctors told me that if I left my curves alone that they would increase a degree a year. This doesn’t sound so bad until you factor in that I was only thirteen years old. By the time I was forty my back will look terrible. For this reason my family and I decided to go ahead with the surgery.

The particular kind of surgery that I had was called posterior spinal fusion. It is about a 4-hour surgery.  In my particular surgery they would put two rods in my back and hold them together with bone screws. This would hold my spine straight. This whole procedure sounds like a lot of fun, doesn’t it?

Getting mentally prepared for Spine Surgery

During surgery you lose blood so the doctors want you to donate before the surgery in order to get your own blood back. After you give blood they make you sit down and drink lots of fluids. You don’t exactly feel one hundred percent because you are very weak but you get over it. I am very glad that I did give my own blood though because I needed it all back and felt much better after I got it.

The doctors need to know everything about your body before you go into the surgery. I had to go to the hospital and get a series of tests done. A series of blood tests were done. Then they did an EKG. Then they get a chest x-ray and finally a urine sample.

How I managed myself having Surgery

Having this back surgery was the most terrifying experience of my life and nothing meant more to me than to know that everyone was behind me. The toughest thing that I had to do was tell my friends. It was tough because I couldn’t do it without crying. I also had to deal with missing my school because I was going to have the surgery. I had practiced a certain way of telling my friends but most of them found out by word of mouth. It was just a very sensitive subject for me at that time. I didn’t want to even think about it but it kept jumping back in my head. My friends and family were so incredibly supportive that it was phenomenal.

A few days before the surgery, I left school and went to Kolkata with my mother. When we got to the hospital, I wanted a distraction. I made friends with other girls who were also waiting for surgery. In the ward, my doctors (Dr. Ujjwal K Debnath from UK/India & Dr Jeffrey R McConnell from USA) asked me final questions. I really didn’t have any, I just wanted to get it over with.

We got a visit from the anesthesiologist who told me what she would do. There were nurses from London and the senior anaesthetists (Dr Neena Seth & Dr Caroline Davies) was from London too. She would make sure that I didn’t feel anything. They had drugs to make me sleep, and to make me numb everywhere. She also told me that they might try to wake me up during the surgery to make sure that I was OK, but she told me that I wouldn’t remember it at all.

I was wheeled down to the Operating rooms where I was greeted by my Doctor and the whole team. I was poked with a needle before surgery (intra venous line). This was scary because I don’t like needles. It turned out to be no big deal.  I started to cry and my anesthesiologist came over. She said, “Here this will help,” and that is the last thing that I remember-she knocked me out.

My blues after Surgery

I barely remember waking up. I remember that I couldn’t open my eyes and that I couldn’t move. I was in immense pain but that only lasted for a few minutes. I don’t remember much of my stay in intensive care. I remember that everyone was very nice and I remember that I was fortunate. They had me wearing a mask on my face that was pushing out air. I had to squeeze something in each hand in order to cough because it hurt a lot. In order to control the pain they had me on a PCA or Patient Controlled Analgesia. It was a morphine pump that I pushed when I felt the least bit uncomfortable.

Breathing played a big part in my daily routine. A nurse from the team came in 2 times a day with a breathing machine that I had to inhale in and try to make the little dial go up. To really let you know that I don’t remember much. I was in intensive care for two days, then I was moved up to my room on the top floor. On the first day in my room my doctors came in and made me get up. They had a certain way of getting me up. First I had to roll on my side and then my legs had to go with my body as I slowly sat up. Boy was this an experience. I don’t think that anything had hurt me so much in my life. Once I was standing I could feel my legs shaking and I was very queasy. This got much easier and after a couple days when I was sitting in chairs. Everyday two times a day a physical therapist came and she walked me, made me do leg and arm exercises and helped me climb the stairs again. I didn’t like it then but now I realize that she was really helpful because without her I would have never gotten up.

I got many gifts, flowers, and some visitors. This was totally overwhelming and it felt really good to know that people were thinking of me and wishing me well. There was nothing that I needed more than love and support then. The nursing team from London were very helpful and had constantly supported me though the recovery. The progress became more and more visible as the days went by. I had to rest a lot though. There was one thing that I didn’t do for two and a half weeks after my surgery and that was eat. I lost about 4kg of weight.

I was home for about a week and then I gradually started going back to school after 6 weeks. Everyone was very considerate and everyone knew that they weren’t allowed to bump into me.

Things basically got back to normal. At my six week check up I told Dr. Debnath  that I was walking normally and could sit for my studies without pain. He was amazed at my progress and cautioned me to be conservative.

The toughest thing in the surgery that I had to deal with was having faith in myself that I would recover. Most of the days that I was home, I just lay around not wanting to get up or do anything. had to teach myself to notice the small steps of my progress and be happy with those. I had to learn that it was going to be a while before I was really back to normal. I just have to keep looking forward and into the future. By the year end, I was one hundred percent.

I think that my purpose in this little article was to give you faith in your ability to get through this tough time. It is going to feel really slow and hard for about a month but remember that each day is a bit better & it is all up hill from there. Always look ahead – we’re lucky to be able to get fixed so perfectly.

Today when I look back

I have passed 8 years since the surgery. I am spending excellent time with my friends and family with straight back. I feel confident as a young woman. I always remain in touch with Dr Debnath. He has always been a guiding light in my life and carrier. I recommend his surgical acumen as well as his humane side which has helped girls like me with Scoliosis.